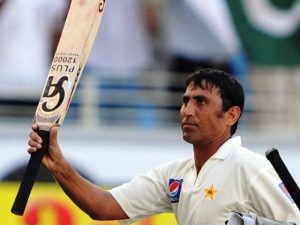 As a result of a third consecutive ton from Younis Khan, Pakistan were in a commanding position against Australia in the first Test being played at Sheikh Zayed Stadium, Abu Dhabi.

Younis, who slammed two tons in the first Test, continued his superb run as he became the first man since 1925 to hit three successive tons against the Aussies.

Australian bowlers did well when they sent Ahmed Shehzad and Mohammad Hafeez back to the pavilion with 96 runs on the board. But the moment Younis came to the crease, the Australians looked perturbed with his presence on the field and the right-hander only added to their woes with another stupendous three-figure knock.

Younis was well accompanied by Azhar Ali, who also scored a century. These two were involved in an unbeaten 208-run partnership at stumps on Day 1.

Mitchell Johnson and Nathan Lyon were the only two bowlers to get a breakthrough each for Australia.

Pakistan are eyeing a series win over the Aussies for the first time since 20 years. With Younis’s form and the way their spinners dominated the proceedings in the first Test, Misbah can positivley look forward to it.