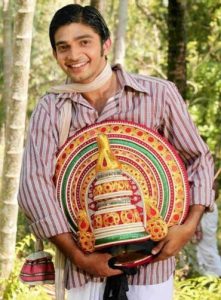 As his first movie as hero ‘Rathiniravedham’ had a good opening weekend, Sreejith Vijay, who has played the role of Pappu in the movie is excited. The actor is very happy to get the positive reviews and good opinions about his character from all around.The actor is now busy answering the good words that is flooding all the day through phones.

Sreejith who had earlier played the role of bavappan, in the Fazil movie ‘Living together’ has also found some new projects. His immediate release will be ‘Ennennum Ormakku’ directed by Robin Joseph. The movie will have him with a beard and he will be in a serious character opposite Dhanya Mary Varghese.His new project will be ‘Chekkanaum Pennum’ directed by Pradeep Nair. Sreejith will appear as a computer instructor in this movie which is a teenage love story.