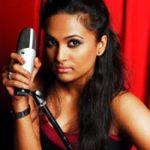 Playback singer Suvi has been the latest heartthrob of Kodambakkam as she has been mesmerizing the guys in all places. Not justly for her beautiful voice, but the singer possesses such a powerfully stunning look that she’ll put you breathless for a moment. But she has no intentions of acting as she openly says it, but will take up the profession just for one actor.

In an interview, the actress said, “I don’t prefer to act. But if I am being signed to star opposite Surya in female lead role, I will do it doubtlessly.”

The actress has already sang the best songs like KODANA KOZHI from SAROJA, KEDA KARI from Raavanan and few songs for Harris Jayaraj and Yuvan Shankar Raja.