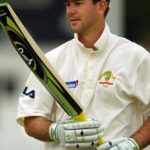 Melbourne: Ricky Ponting has dropped out of the top 20 in the International Cricket Council (ICC) Test batting rankings for the first time since 2001 after Australia’s crushing defeat by England in Adelaide.

Ashes holders England won the second Test at the Adelaide Oval by the huge margin of an innings and 71 runs to go 1-0 up in the five-match series following the drawn opener in Brisbane.

The Australian skipper dropped 12 places to occupy 25th spot in the latest edition of the rankings published on Tuesday.

There are no Australians in the top 10 leading batsmen, while left-arm seamer Mitchell Johnson, dropped after the Brisbane Test, is the only Australian in the world’s current top 10 bowlers.

England’s Jonathan Trott, who made a century in Brisbane and 78 in Adelaide, has climbed two places to sixth in the batting rankings.