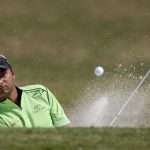 New Delhi: Rahil Gangjee sealed the Nationwide Tour Card after finishing in tied 74th position after the sixth and final round of the US PGA Tour Qualifying School at the Orange County National Golf Center & Lodge in Orlando.

The only Indian at the Q-school this year, Gangjee ended with a one-over 73 at the Crooked Cat course for a two-under 427 aggregate score.

Though Gangjee failed to seal a PGA Tour card, he qualified for the second tier Tour.

The Nationwide tour serves as a feeder series to the US PGA Tour and the top 25 in the order of merit at the end of the year earn their PGA Tour card for the next season.

A total of 29 players secured Tour cards for next season. The next 50 earned Nationwide Tour cards.

Touted as one the toughest challenges in golf, the final round of Q-school saw Gangjee battle extreme weather conditions as the temperature dipped to 7 degree Celsius.