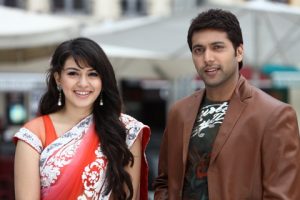 Engeyum Kadhal a feel good romantic entertainer is going to be sweet and short with a run time of just 2 hours and 5 minutes.

The expectations are high on this film as the release date is getting closer. The film features Jayam Ravi as Kamala and Hansika Motwani as Lolita. As the film is a romantic tale there are no villains and big fight sequences but just light-hearted humor runs throughout the film. Engeyum Kaadhal primarily focuses on love, Ravi and Hansika made tremendous on-screen chemistry.

Prabhu Deva says “Engeyum Kaadhal is a two-hour-five-minute romantic ride and it will appeal youth audiences in a bigger way. Apart from the lead stars there are two other stars in the film one is Harris Jayraj and other one is Nirav Shah. Music of EK received outstanding response while cinematography will be tremendous and one will surely stay glued to the big screens.

Sun Pictures will release the movie produced by AGS Entertainment this Friday.

Bookings across Tamilnadu have started from today. Go book your tickets and win a chance to meet the stars of this romantic entertainer.