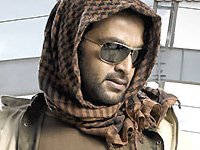 Prithviraj seems to be youngest actor in Mollywood  to have handled the roles of underworld dons with elaan. Take his short career in films and you will see a plenty of similar roles, starting form his initial films like ‘Stop Violence’, to the recent ‘Thanthonni’.

The film that he is already on ‘Tejabhai and family’ will also have him in the title role, which is also a don based on Malaysia. The movie by Deepu Karunakaran, the hit director of ‘Crazy Gopalan’ is a pretty humorous tale about the bad don who changes faces to suit the typical family values, after he had fallen for a social worker ‘Vedika’. Akhila Sasidharan of ‘Karyasthan’ fame will come up in the role of Vedika in the movie, which is already in the sets in the capital city. The movie is expected to reach the theatres by the month of July.