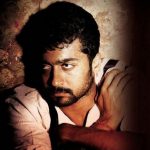 Suriya is one actor who likes to experiment with different get-ups on screen. Whether in Kaakha Kaakha, Perazhagan, Pithamagan or Vaaranam Aayiram, the actor has performed each role with ease and panache. Now he is busy wrapping RGV’s much-hyped Raktha Chaitra.
Raktha Charitra (RC) is a real-life story based on Paritala Ravi, a gangster in Andhra Pradesh in the early ’80s. “I play Maddelacheruvu Suri, an intense character, and a rival of Vivek Oberoi, who essays the role of Paritala Ravi. Suri is the only one in the story who’s still alive. I haven’t met him yet, but I’ve tried to model my body language based on the narrative given by director Ram Gopal Varma,” Suriya said to a leading English daily.

The film is a bilingual being made in Hindi and Telugu (also dubbed in Tamil as Rattha Charitram). “I didn’t take up Raktha Charitra with an intention to enter Bollywood. It’s just that when Ramu sir told me about the script, I was very impressed. The movie is so intense and has no heroine, songs or dances. So, Ramu sir calls it a men’s film. And for both Ramu sir and me, the film has come at an important stage in our careers; RGV has the experience to direct such an intense film after so many milestones and I can afford to experiment with such a character,” he added.

Raktha Charitra will also mark the Bollywood debut of Suriya. “It’s about widening my reach and taking up the challenge to appeal to a pan-Indian audience. It’s a completely different set-up and ambience. But I won’t leave Tamil cinema. Even when I accept a Hindi film, I’ll ensure it’s watchable for my fans in the south as well,” he clarified.