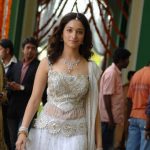 After the super hit of his Paiya, popular Tamil director Lingusamy is now gearing up to commence production of his seventh directorial venture, a Tamil-Telugu bilingual.

Currently, the director is busy completing the script. The latest buzz is that gorgeous Tamanna will play the female lead in the Tamil version. It would be interesting to watch the on screen chemistry of Simbu and Tamanna.

There are also reports that the director is trying to rope in Madhavan to play a prominent role (as Tamanna’s brother) in the film. Official confirmation is expected soon!