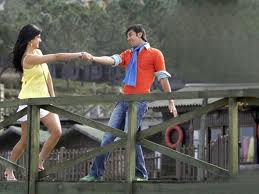 Love is in the air in the beautiful locales of Spain, in truly B-town ishtyle!

After saying na-na about their relationship, lovebirds Ranbir Kapoor and Katrina Kaif have finally exposed their romance. The B-town’s hot couple was spotted coochie-cooing on the golden sands of Spain where the two stars had been on a short holiday.

The two looked quite relaxed and enjoying being together. They were clicked entertainment magazine, in which Ranbir was seen topless with only a pair of shorts, while Kat looked amazingly sexy in bikini, scouting the sea shore.

Only few days back Ranbir and Kat gave a hint about their affair when the two turned up together to watch ‘Lootera’. Katrina was also said to have visited Sri Lanka to be with Ranbir, where he has been shooting for ‘Bombay Velvet’. Wait, there is more! Recently at a special screening of ‘Ship Of Theseus’, Ranbir got up to sing “Happy Birthday” to Katrina in front of everyone! Oooohh now that’s really a ghazab ki prem kahani!

So now, its clear that something is indeed lovey-dovey between these two stars.. Now what you got to say, Ranbir and Kat??