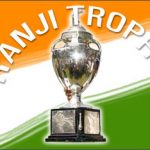 Tamil Nadu would be praying for divine benevolence by way of dry weather over the next four days when they take on leaders Mumbai in a crucial Group A match of the Ranji Trophy Super League here Wednesday.
With their previous two games here being washed out, Tamil Nadu are on 11 points after five outings and are in dire need of strong results in their remaining two matches, both of which they would be hosting.

In contrast, Mumbai are virtually assured of a spot in the quarterfinals as they head group A with 20 points and would be looking to consolidate their position.

Delhi are currently in second place with 12 points while Gujarat are on 10 and Bengal on nine. Thus, Tamil Nadu have plenty to play for in their remaining two games as only three from each of the two groups qualify for the quarterfinals, where they will be joined by the top two teams from the Plate groups.

For Tamil Nadu, it has been a wretched season so far and to their misfortune, six of the seven league matches are at home when the northeast monsoon is at its peak in this region.

In fact, heavy rains are forecast this week and that could shower more misery on the Tamil Nadu’s Ranji campaign.

Mumbai, having notched up two outright wins, appear to be in imperious touch with both their bowlers and batsmen in top gear going by the ease with which they thumped Gujarat by an innings in their previous game.

If weather permits play on all four days, then it should produce a keen contest and an acid test for a couple of young Tamil Nadu bowlers who will be up against seasoned Mumbai batsmen, almost all of whom are in form.

Wasim Jaffer, always a prolific scorer in domestic cricket, has already notched four centuries, while Ajinkya Rahane has two and the gifted Rohit Sharma has a double century to his credit.

The Mumbai bowlers, notably seamer Dhawal Kulkarni (16 wickets), off-spinner Ramesh Powar (17) and left-arm spinner Iqbal Abdulla (16), have done a fine job thus far and the spotlight would again be on the trio.

Boasting of a wealth of talent besides vast experience, Mumbai thus would be the obvious favourites against Tamil Nadu, who are under pressure to pick up some points and get inject some momentum in their campaign.

The Tamil Nadu players haven’t had much time in the middle due to rain-induced interruptions, although former skipper Subramaniam Badrinath has grossed 599 runs aided by three centuries, but the team had to do without their key bowler, Ravichandran Ashwin who is on national duty.

Ashwin took 16 wickets in the three games he played and his absence has definitely blunted the Tamil Nadu attack that will now be under more closer scrutiny against Mumbai.