Just a couple of days back, we have informed that Ravi Teja’s next flick has been titled as Nippu, which would hit the floors from 28th May. Here is the latest update of the project. The leggy lass Deeksha Seth has been penciled in as the leading lady of Nippu. 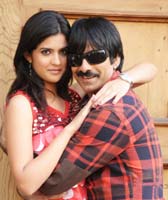 This is the second time Ravi Teja and Deeksha Seth are pairing up after their successful film Mirapakaya. Deeksha is currently acting as second fiddle to Anushka in Prabhas starrer Rebel. Though Deeksha has earned hits in her account with Vedam and Mirapakaya, She is yet to prove her mettle in Tollywood.

Nippu is being directed by Guna Sekhar and produced by YVS Chowdary on Bommarillu banner. Yuvan Shankar Raja bagged the project to compose the music for the film.