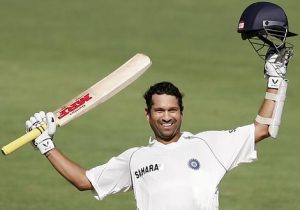 New Delhi: Batting genius Sachin Tendulkar, who has had a tremendous Test series against South Africa, achieved the Number 1 spot in ICC Players Rankings for Test batsmen on Friday.

The iconic Sachin Tendulkar proved to be the most prolific run-scorer for India, notching up a historic 50th Test ton in the process, but could not go past the ever-consistent Jacques Kallis in the just-concluded three-match series against South Africa in Cape Town. Tendulkar hit a total of 326 runs at an average of 81.50 in three matches with a highest of 146.

Kallis, on the other hand, scored a total of 498 runs at an average of 166 and was dismissed only thrice in 870 balls. His highest of 201 not out in the series in the first Test gave Proteas their only win in the series.

The series that ended in a 1-1 draw, witnessed keen contest between the bat and ball with some of the greatest legends of the game in Kallis, Tendulkar and VVS Laxman proving their worth all over again under tough conditions.

One of the most under-rated but most reliable batsman –Kallis — yet again rose to the occasion and turned out to be instrumental in South Africa challenging the number one Test team in the world.

In fact, of the three times that he got dismissed in the series, one was an unfortunate run out at the non-strikers` end, while another was a result of arguably the best ball of the series.

For India as well, the story was no different. For them, batting icon Tendulkar contributed to the team`s success, becoming the second highest run-getter in the series.

In fact, the right-hander, who now creates a new record every few runs that he scores, went on to hit the historic 50th Test century at Centurion in the first match itself.

But he did not stop there and chipped in with valuable runs in all three matches. He also scored another hundred in the third Test that ultimately helped the team to draw the series against the mighty South Africans in their own backyard.