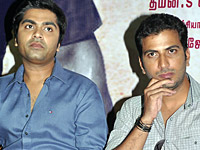 Silambarasan is currently buy with Osthi, the remake of Bollywood blockbuster film Dabangg.

Simbu is reprising the role played by Salman in the original version. Simbu plays Vel Murugan a powerful cop in the film. Right now the actor is busy working out at the gym to look fit of a cop. Tollywood beauty Richa Gangopadhaya is playing STR’s love interest. Sonu Sood, reprising his role from the original while Jithan Ramesh plays Simbu’s brother. Nizhalgal Ravi and Revathi will essay the roles of Simbu’s parents in the film.

Bollywood hero Salman Khan will be visiting the sets of Osthi, to give some tips and suggestions to Simbu and the rest of the team. Osthi will be a whole new film and will be a great treat for Simbu fans.

The technical team comprises of Gopinath for cinematography, V. T. Vijayan for editing, and Thaman for music while story and screenplay is done by Dileep Shukla.

Osthi is directed by Dharani while Ramesh and Mohan Apparao are producing the film under the banner of Balaji Real Media.