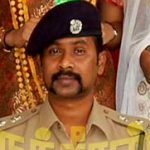 Cinema has no ends of inspiring the masses and none are elision. Especially, when it comes to mass hero like Surya, the universal people are so bounded to his styles. When few cop roles are said to be inspired from real life into reel, here is an example of a real cop inspired by Surya’s Singam.
Taking on the role of a police officer, Surya’s stylish moustache has made his fans very much compelling to have it. Dharmapuri SP Sudhakar is a film buff, who continuously keeps all the movies along with the normal audiences and whistle for the mass appeals. After watching the stylish look of Surya, he now carries the same style of moustache.