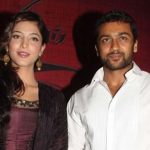 Ezham Arivu is a film which has Surya and Shruthi Haasan in the lead roles is being produced by Udhayanidhi Stalin under the banner Red Giant Films. This science fiction thriller film is to be directed by A R Murugadoss. Harris Jayaraj is composing the film. All the female voice songs will be sung by Shruthi Haasan herself. The shooting of this film was supposed to commence in China in the first week of June. But due to preoccupation of Surya, it is now planned to commence the shooting in Chennai itself. Ravi K Chandran will be handling the camera Director A R Murugadoss while speaking about this film said,” After Ghajini we both are joining for the film Ezham Arivu. There are many expectations among the fans. I am little nervous and scared when I think of this. This responsibility will make us win again. I love Surya. This story which I have created will utilize Surya fully. After release of the film apart from Kollywood and Bollywood, Hollywood will also be taken aback