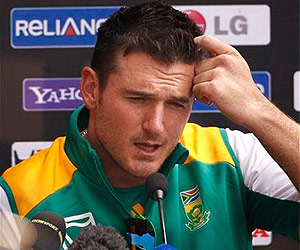 NEW DELHI: South Africa cricket captain Graeme Smith is keeping his fingers crossed on the nature of the fresh pitch and the dew factor at the Feroze Shah Kotla, ahead of the team’s tournament opener against the West Indies here Thursday.

Smith’s concern was understandable as the tie will be the first international match at the venue after it was suspended by International Cricket Council (ICC) in January 2010. The suspension came after an India-Sri Lanka in December 2009 was called-off due to an “unfit” pitch.

“We are all aware of what happened in Delhi and this one looks like a fresh pitch,” said Smith.

“It is an unknown factor to both the teams. At the same time, from what I have seen in the last few days, a lot of work has gone into the pitch and the outfield. I think we have to commend the authorities for that and hope it plays well tomorrow.”

Smith felt that dew will play an important role in the day-night encounter, but conceded it as a harsh reality.

Smith’s counterpart Darren Sammy, however, said that they will be using the inputs of the team members who have played here in the champions league.

“We have quite a few guys who have played here before and their inputs will be valuable. We have an idea how the pitch will behave, but we need to wait and see when the first ball is bowled.”

ICC’s chief pitch curator Andy Atkinson has already dispelled all apprehensions about the newly laid pitch saying it is “ready to play”.

Atkinson, alongwith Venkat Sundaram, chairman of the Board of Control for Cricket in India’s (BCCI) grounds and wickets committee, has been supervising the pitch preparation at Kotla.

“A four or a five-day pitch can be different, but a one-day pitch should have a consistent bounce and a batsman should strike with confidence. The idea is not to negate the bowlers,” said Atkinson.

Sundaram said the track will not only favour the batsmen, but it will also have something for the bowlers.

“We can’t prepare a pitch to suit a particular bowler or a team. In Australia, South Africa, England where the ball moves and bounces, a 250-plus total becomes a winning score. The track should have something for the bowlers,” Sundaram said.