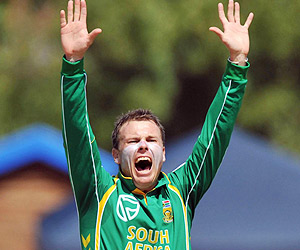 NEW DELHI: South Africa got rid of West Indies opener Chris Gayle for 2 off the third ball of the day after they won the toss and decided to field in their ICC Cricket World Cup Group B match at the Feroz Shah Kotla.

South Africa, playing with three spinners, opened with the off spin of Johan Botha and it paid dividends immediately.

Pakistan born leg spinner is debuting for the Proteas today.