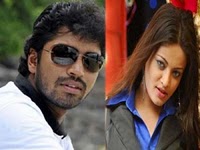 Allari Naresh has signed up a new film with producer K L Damodar Prasad, which will be made under his banner Sri Ranjith Movies. The latest buzz is Sneha Ullal has been roped in for the female lead role in the movie.

Sneha Ullal has earlier acted in a short role in Ala Modalaindi which is from the same banner Ranjith Movies and the producer has now offered a full-length role for the actress in his next flick. Sneha failed to grab good roles, despite her Simha with Bala Krishna is a huge hit at the Box-Office, last year. The actress later signed up Kannada films and entered Sandalwood to test her luck.

Well, let’s see if Sneha Ullal can make it big by co-starring with the bankable Star Allari Naresh.