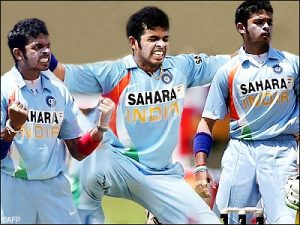 Shantakumaran Sreesanth may have missed the cut in the Indian squad for the upcoming World Cup but has come in for praise from selection committee chairman K Srikkanth, who has described him as an “excellent bowler”.

Terming selector’s job as a “thankless one”, Srikkanth said Sreesanth is a genuinely good outswing bowler.

“I have told him (Sreesanth) to be calm and he will be a great bowler,” Srikkanth was quoted as saying in ‘On Record’ show telecast on a TV channel on Sunday.

The former India captain said that maturity comes with passage of time and experience that one gains playing international cricket.

Describing cricket as a “futuristic game”, he said that the game has evolved over the years.

“Cricket will overtake football and athletics in next two years in Kerala. Every state needs icons. Orignally, the state had PT Usha and now it is Sreesanth. Many more Sreesanths will be emerging from Kerala,” he said.

On any regrets during his cricketing years, Srikkanth said, “Sometimes I feel, I should have scored more runs, should not have thrown my wicket…”

Cricket is a great unifying factor in India and all the three formats – Test, ODIs and Twety20 – will co-exist, he said.

Srikkanth said he had always played cricket for fun and enjoyment. “I did not want to be a professional cricketer. My motto is do your best and leave the rest up to God.”