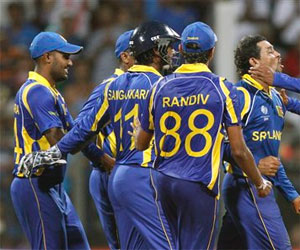 COLOMBO: Sri Lankan cricketers participating in the ongoing Indian Premier League (IPL) have been asked to return home early to prepare for the national team’s tour of England that gets underway on May 14.

Ten Sri Lankan cricketers are contracted to various franchises, of which two of them are being led by Kumar Sangakkara and Mahela Jayawardene, the islanders’ two senior most players.

The Sri Lankans are scheduled to leave for England on May 10, and the IPL-contracted players have been requested to return home at least by May 5 to prepare for the tour.

The IPL ends on the May 28. “On a recommendation made by the national selection committee I have instructed the secretary of the board to inform the players to return by at least the 5th of May to prepare for the tour,” Sri Lanka’s sports minister Mahindananda Aluthgamage said on Tuesday.

“When contracted players of Sri Lanka Cricket represent other tournaments, they should make sure that their priority lies with the national team and this will be strictly adhered to in the future,” Aluthgamage added.

The move by the Sri Lankan government is in complete contrast to the one that was taken three years ago when it cancelled a tour of England in 2009 to allow the players participate in the hugely popular Twenty20 league, which had started in 2008.

The government’s decision at that time attracted severe criticism from both the media as well as several former players, including 1996 World Cup-winning skipper Arjuna Ranatunga.

As the list features match-winners like Malinga and Dilshan besides Sangakkara and Jayawardene, owners of the respective franchises would be hard-pressed to find replacements for these players.