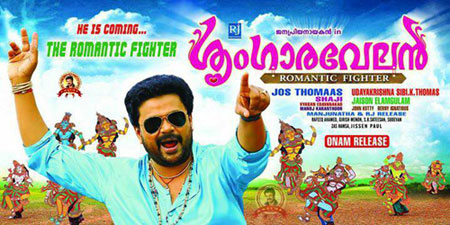 Jose Thomas’s Sringaravelan has all the ingredients packed into one, that ends up as another Dileep comedy riot which will attract the family audiences during Onam season. Kannan (Dileep) is the son of weaver based in Kuthampully, but he is not interested in pursuing the family business. Instead he has learnt fashion designing and is in the search for finding some easy ways to make money. He has some friends like Vasu (Kalabhavan Shajon) as his man friday and a goonda named Yesudas (Lal). Kannan is sent by his dad to a kovilakam, where the wedding of Radhu (Vedhika) is happening there. Due to his involvement, the ceremonies get affected and he has to stay back at the kovilakam for some more days. As it is mandatory in films, Kannan makes a terrific impact in the mind of the heroine. Then comes some unprecedented happenings and the makers of the film test your patience even more. The team behind last year’s blockbuster hit Mayamohini has come together once again here and they continue to try making the viewers laugh with corny lines aimed at tickling the funny bone. Director Jose Thomas and scenarist duo of Siby K Thomas and Udayakrishna tries a bit too hard to make the viewers laugh. Lal’s efforts to play funny at times make the viewers feel sympathetic towards him. Kalabhavan Shajon is good in parts but Baburaj disappoints big time. The heroine Vedhika has nothing much to do and is there as the glam quotient. The film’s real trump card, is Dileep as Kannan who has played once again to the gallery. The makers have perhaps intended to package the film as a wholesome entertainer, which need not be taken too seriously. If you are a hardcore Dileep fan Sringaravelan can be a nice option, for the Onam holidays.