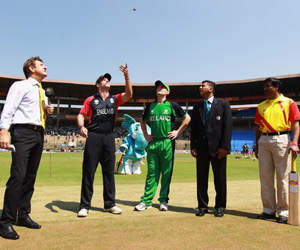 BANGALORE: English skipper Andrew Strauss along with Kevin Pietersen build a strong partneship of 91 runs. Young Irish bowler George Dockrell bowled out the English skipper when he was on 34. However, Pietersen is keeping the momentum as the stylish right-handed batsman cruises to half-century till he falls at 59.

After snatching a thrilling tie against favourites India, a rampaging England will look to mow down minnows Ireland and pocket the crucial two points when they meet in a group B match of the cricket World Cup here tomorrow.

Earlier English skipper Andrew Strauss won the toss and elected to bat first in this Group B clash.

Stuart Broad returned to the side after recovery from illness and replaced Ajmal Shehzad, which is the only change in the England side that played India.

Ireland will like to take a cue from the Netherlands side who piled up 292 runs against England. So they will know that the England bowlers can leak runs if put under pressure.

The Irish team made a surprise change by replacing Andre Botha, who bowled well against Bangladesh, with Gary Wilson.

After an unconvincing victory against Holland in their opening match, England were in sniffing distance of a memorable win over India on Sunday but the English team almost threw the chance before holding on to an astonishing tie.

Having three points from two matches, England are placed just behind India in the table with the only thing separating them being the run-rate. Andrew Strauss’ men would hope to notch up a huge win tomorrow to get to the top.

England’s batting has fired in both their previous encounters where they chased down 292 against Holland and scored 338 against India and skipper Strauss would want another solid performance from his batters.

However, the bowling has been a bit lacklustre as they have been leaking runs galore. James Anderson produced the worst World Cup performance by and Englishman when he gave away 91 runs in 9.5 overs, while Stuart Broad’s replacement Ajmal Shahzad bled 53 in eight overs against India.

Save for Tim Bresnan, who took 5-48, none of the other bowlers, including spinners have been very successful.

“I think the conditions have been very hard for the bowlers. The batting team has to score heavy to defend. It was a fantastic performance by Tim (Bresnan) on a surface like this. He is in incredible form,” Bell said.

“We were chasing 338 and I do not think so many teams in the past would have done that. We have got the quality in bowling and we were 100 per cent right in our fielding too.

“We can be a threat to the other teams in the World Cup if we start playing collectively as a group. As a team we can match anyone,” Bell said.

Ireland, on the other hand, didn’t have much to take home from their match against Bangladesh, their first match of the World Cup.

Ireland’s bowlers fared better than the batsmen as they dismissed Bangladesh for 205. But the team was let down by the batsmen as they failed to chase down the total and it would take a mammoth effort if they have to salvage any hope of an upset tomorrow.

“We have to bounce back. We can’t let it (defeat against Bangladesh) bother us. We have to leave the batting here and move on to Bangalore,” Skipper William Porterfield said.

Interestingly, Ireland will have the services of some of the regulars of English county circuit such as Ed Joyce, who was granted special dispensation by the ICC to play for the country of his birth at the last moment.

Joyce, who was dropped by England after the side’s dismal showing at the 2007 World Cup, will be joined by Somerset spinner George Dockrell tomorrow.

Bell also reckoned there are some dangerous players in the Ireland side who can spoil their party.

“We know a fair bit (about Ireland). These days a lot of those guys are respected on the county circuit. They have earned respect in international one-day cricket and there is a lot of experience in their side from county cricket.

“It’s a game we’re looking forward to and will have to play well in. It is not a game we can turn up and just coast.

There are some dangerous players in that Ireland side,” he said.