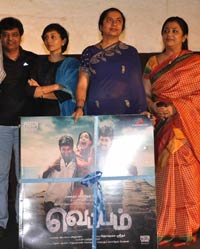 Director Gautham Vasudev Menon is known to do things in style and the audio launch of his Photon Kathaas produced Veppam was no different.

The film is produced by him while the audio is also being launched under his new music label. The director is Anjana, his former assistant, while Nani from Telugu and Karthik Kumar play heroes. The film is a rugged, city based flick.

The audio was launched by Suhasini in the presence of the entire team of Veppam along with well wishers from Kollywood including Parthiban, Lingusamy, KV Anand, Vivek, Shanthnoo, Poornima, Radha Mohan, Sasi, Nasser and Priya V amongst others.

A trailor and two songs were screened. But prior to the release, a short film was shown on the big screen, showing an unplugged jamming session with Gautham and the team of singers and the music composer Joshua Sridhar and lyricist Na Muthukumar.

Gautham interviewed each of them after which they performed each of the songs from the film. The lead heroine Bindu Madhavi was present along with Anjana in the short film along with the heroes. However, both Bindu and other heroine Nithya were missing at the function.

The short film gave a peek into the film itself and was greatly appreciated by the audience. Said Suhasini, “After Mani, its only Gautham who makes films on city life. I am happy to see the city captured so well in the movie.”

The camerawork is by Kalavani fame Om Prakash. In the short film Joshua revealed, “I had almost given up film music since I was not getting good directors. That’s when Anjana met me and the rest is history. The lyrics are a huge strength to the music. I think now with this film things will certainly get better for me”.