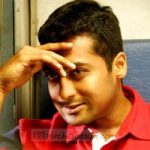 Suriya, the busiest actor of Kollywood is currently shooting for his forth coming film 7aam Arivu.
Buzz is that after 7aam Arivu Suriya is going to work with director K.V Anand. This untitled film is going to be produced by AGS Entertainments. The production house has bagged many hits in the past. In 2010 they have come up with a new genre film Madrasapattinam, which was a big hit.

The other details of the cast and crew are going to announced soon by the film makers.