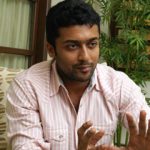 Though Suriya was not able to take the Bollywood audiences by storm with his debut film Raktha Charithra but Bollywood offers are pouring in for the actor.
Suriya was approached by many Bollywood filmmakers but he didn’t any films. The actor was not keen in doing Hindi films for time being irrespective of the role or the money. He recently wrapped up the shoot of 7am Arivu directed by Murugadoss. Suriya is currently looking forward to start KV Anand’s next film Maatraan. It’s a big budget action film in which Suriya stars in five different roles. After Maatraan Suriya is going to join director Hari for the fourth time which is an action packed entertainer.

Bollywood filmmakers are queuing up for Suriya as he looks great and also a superstar in South so, making a film with him in the lead role makes a great business plan.