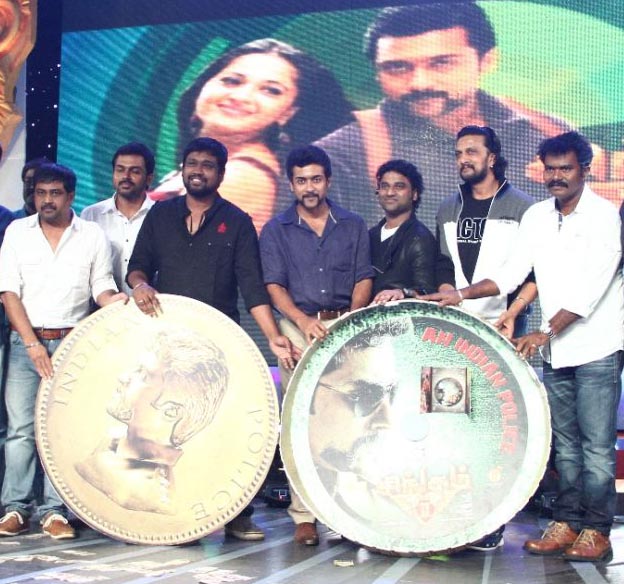 The trailer launch of Suriya and Anushka starrer ‘Singam’ has been done at Prasad Labs in Hyderabad.The film is the sequel of Suriya’s superhit film ‘Yamudu’. Hansikha is playing a key role, and Anjali is playing an item number in it.

S.Lakshman Kumar is producing this movie under Prince pictures banner.

The producer said that it is his first film and they are planning to release the movie on June 28th, releasing the audio on 14th.

Anushka says, ” All the films I’ve done in Studio Green banner are big hits and I am very happy at working again in this banner. I have acted with Suriya in Yamudu and it is a big hit. It is a joy to pair up with him once again for it’s sequel. This is a very gripping subject and it will be a bit higher than Yamudu regarding entertainment”.

Suriya says, ” I feel like coming to my own home whenever I come to Hyderabad. I am very thankful to Telugu people, who are receiving every film of mine very well. My market value has increased with Yamudu and it’s sequel ‘Singam’ will be a bit higher in technical aspect and entertainment. This is a film which shows the value of relationships, social responsibility and I have done a very challenging cop’s role. Devi Sri Prasad has given an outstanding music score, and the audio is a big hit in Tamil. I hope this film will become a huge hit here”.