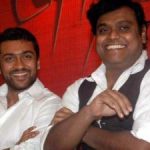 BizHat.com brings you good news for the die hard fans of Suriya and Harris Jayraj. You guys need to re charge yourselves for the month of March for listening to the audio of Harris Jayraj next album.
Most of you might have guessed the album name its Suriya’s 7am Arivu. The team of the film is in plans to bring the audio into the market by the end of March. As per the sources the audio rights were bagged by Sony BMG for a huge amount. Sony BMG has recently acquired the rights of Harris Jayaraj’s album like ‘Engeyum Kadhal’ and ‘Ko’ which proved to be the top chartbusters.

Moreover director AR Murugadoss, Suriya, producer Udhayanidhi Stalin and Sony BMG are planning for a grand audio launch and as said earlier Suriya will be performing live circus stunts during the audio launch. Shruthi Hassan is playing the female lead opposite Suriya and the film will release simultaneously in Tamil and Telugu. The Hindi version of the film is yet to be finalized as the makers are in a dilemma either to dub or remake the film.

1 thought on “Suriya’s 7am Arivu audio in March”