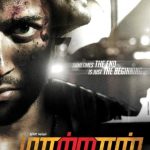 Suriya’s KV Anand directed AGS Entertainment produced Maatran is one of the most eagerly awaited films of 2012.
The overseas rights of the film have been sold at a new record price.
Maatran is an action thriller starring Suriya and Kajal Aggarwal in the lead along with Sachin Khedekar, Vivek, Daniel Balaji and Milind Soman.
It isdirected and co-written by K. V. Anand and scripted by writers Subha. The film has music by Harris Jayaraj.

Maatran Telugu dubbing rights has been sold for a record high. It will be called Duplicate in Telugu. Now it is clear that one of the characters Suriya plays is a duplicate.

Will the duplicate be a good guy or bad guy? Catch up with Maatran in May end or June to find the answer.