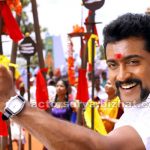 Actor Surya made his appearance as a shy reserved boy, where he was hesitant to keep embrace the heroines’ shoulders. He was deliberately backwards in dancing and so was his kind of films he did for the first 15 projects.
But now the actor has gone ahead in places with 8 continuous blockbusters: Ghajini, Aaru, Sillunu Oru Kadhal, Vel, Vaaranam Aayiram, Ayan, Aadhavan and recently release Singam. There is no doubt about his upcoming films turning to be a greater hit getting him reached than the place he is present now.

It is because all his three upcoming films will be made directly in Hindi and Telugu. Ram Gopal Varma’s Raktha Charithram is getting released in two parts for Hindi and Telugu. A.R. Murugadoss’ 7 AUM ARIVU is also getting made in Tamil, Telugu and Hindi. The third project is Businessman, which is produced by Ram Gopal Varma and is directed by Puri Jaganath.

So Surya is going to have more fans across India as Hindi and Telugu film industry is already looking out for his movies.