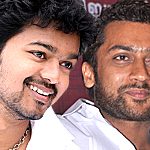 A grand audio launch function is being planned for ‘Vamsam’, a film which would mark the arrival of Tamil Nadu Chief Minister M Karunanidhi’s grandson Arulnidhi Thamizharasu as hero.
If sources are to be believed, the music release event is scheduled in Chennai on July 2. The Chief Minister would preside over the function and would release the audio.

And the first copy would be received by Vijay and Suriya, the two top league actors of Tamil cinema. Many big guns of Kollywood would attend the grand function, sources maintain.

Arrangements for the event are being made by M K Thamizharasu, Arulnidhi’s father and the producer of ‘Vamsam’. Directed by Pandiraj of ‘Pasanga’ fame, ‘Vamsam’, set in the backdrop of a village in southern Tamil Nadu, has Sunaina as heroine.

1 thought on “CM to give, Vijay & Suriya to receive”