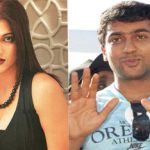 After a vigorous hunt for actresses, A. R. Murugadoss has finally zeroed on Kamal Haasan’s elder daughter Shruti Haasan for his upcoming film. The film is produced by Udhayanidhi Stalin of Red Giant Movies and has Surya playing the lead role.
Though according to grapevine, earlier Murugadoss was keen on roping Asin as the female lead but finally took the decision to cast Shruti with Surya. Since, producers are planning to make the film simultaneously in Hindi, Telugu and Tamil; they would rather prefer Shruti who is popular in Bollywood.

Shruti Haasan made her debut in Hindi film industry with “Luck’ and shared screen space with Aamir Khan’s nephew Imran Khan. A.R. Murugadoss has already raked in critical appreciation as well as box-office moolah with “Ghajini’ and Surya is making headlines in tabloids after Ram Gopal Varma signed him for crime-thriller “Rakta Charitra’.