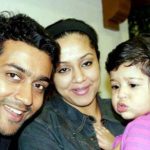 Surya Son is to be named as Dhina as per sources. Surya become the proud father of a baby boy on June 7 when his wife Jyothika gave birth to a boy child.
Surya and Jyothika got married on September 11, 2006 and were blessed with a beautiful baby girl Diya.
Surya must be the happiest man in the whole world at the moment, (just as he utters the same words as his film “Sillunnu Oru Kadhal’ of yesteryears). Both his career and family life are going great guns now. He has been striking gold with continuous successes in all his films and is awaiting for more triumphs for his upcoming projects – “Raktha Charithra’, “7 AUM ARIVU’ and “Businessman’.