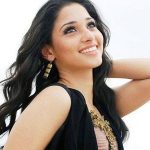 The stage is all set for Tamannaah’s re-entry in Bollywood. Few days ago, we had reported that Tamannaah is going to reprise Sridevi’s role in the remake of Himmatwala. Ajay Devgan is playing the lead role in the film and Sajid Khan is going to direct it.

Apparently, Sajid Khan had earlier approached Katrina Kaif and Anushka Sharma for the film, but when both of them dropped out, Ajay Devgan suggested that a South Indian actress would be better for the role. That’s how Tamannaah bagged the lead role and Sajid Khan is reportedly making quite a few changes in the script to suit the taste of the audience. The film will go on floors in August.

Meanwhile, Tamannaah is currently shooting for Puri Jagannadh’s Cameraman Ganga Tho Rambabu in which she’s paired up with Pawan Kalyan. Life has come a full circle for Tamannaah. She began her acting career in a Hindi film titled Chand Sa Roshan Chehra which bombed at box-office and now she’s one of the top actresses in South looking to make a name for herself in Bollywood. Good luck, Tamannah.