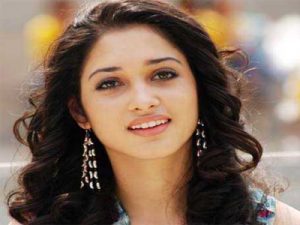 The combo of director KS Ravi Kumar and Kamal Haasan has given many films like Avvai Shanmugi, Panja Thanthiram, Dasavadharam and Manmadhan Ambu, now latest we hear is that the director is in plans to direct a full length comedy film once again with Universal Star Kamal Haasan.

Coming to heroine, the director felt that Tamannah will be the perfect match for Kamal and he approached her for call sheets. In Kamal’s films it’s routine to have Lip locking scenes, keeping this in mind Tamannah asked the director whether there were any Lip locking scenes. K S Ravikumar replied “Off course yes and it may not limit to one if the story line demands. The actress was initially timid of doing kissing scenes but she accepted the offer finally with a demand of Rs. 1.25 crore as her remuneration.

The director and producer under went a shock over the demand made by the Sindhi girl.

Feel like Tamannah is on the outlook it’s better to Make hay while the sun shines.

Well now the ball is in director’s court, need to see whether KSR accepts Tamannah’s demand?