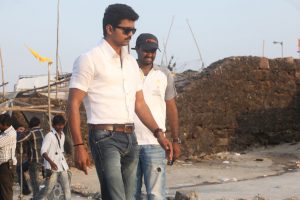 Vijay-starrer Tamil action-drama “Thalaivaa”, set to release in Tamil Nadu and Puducherry Aug 20 after being stalled for over a week, will reportedly come out sans the tagline – Time to Lead.

“We came to know that the film’s tagline ‘Time to Lead’ wasn’t received very well by the state government. We have been advised to drop the tagline from the film’s publicity posters and all other forms of promotions ahead of its release on Tuesday,” a member from the film’s unit told IANS.

“Thalaivaa” was stopped from being released in Tamil Nadu and Puducherry Aug 9 after a political outfit issued threats to theatre owners.

But once the makers announced that the the film has got a green signal, one of the multiplexes here opened advance booking Sunday. Other multiplexes too are expected to follow suit.

Also featuring Amala Paul, Ragini Nandwani, Sathyaraj and Abhimanyu Singh, “Thalaivaa” opened to good response in other parts of the country and in the overseas market.
Meanwhile, J. Anbazhgan, one of the leading Tamil producers, is willing to distribute “Thalaivaa”.