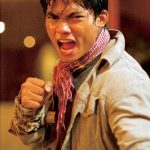 The world renowned young, cool and hot hunk Tony Jaa has wide range of fans following across the globe. Even a 5 year old kid has been his ardent buff and now it seems that the actor has been roped for A.R. Murugadoss’ upcoming film 7 AUM ARIVU. The film features Suriya and Shruthi Haasan in lead roles as known previously.
The highlighting attribute of this film is that there are only 3 characters in this film and there are no other supporting roles.

The complete story will center on these three actors. Since this film will be made simultaneously Hindi and Telugu as well. So it will be an additional feature to attract even the Bollywood fans, who are already excited about Surya’s debut release RAKTHA CHARITHRAM in August.