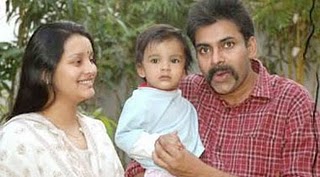 Akhiranandan, the cute little son of pawan kalyan has become the subject of discussion for few minutes on the stage of ‘Teen Maar’ audio release. Ali while explaining the shooting schedules of ‘Teen Maar’ in Mysore narrated a sweet episode between pawan kalyan and Trisha.

Fact is that Trisha doesn’t know anything about Akhira earlier before. For the first time when she saw the little boy in Mysore hotel room, she was surprised about younger looking pawan kalyan having such a big son. Ali continued saying that, fast forward 10 years from now on Akhira will be the hero and Trisha will be doing the mother roles to him.