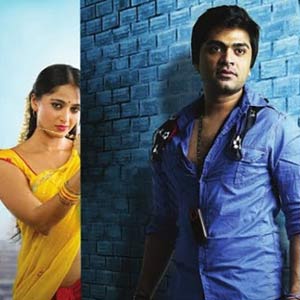 Young Superstar Silambarasan’s forthcoming film Vaanam is going high in sky right from the first day shoot. Though Vaanam is the remake of Tollywood critically acclaimed film Vedam it grabbed a lot of attention in the Kollywood circles and also amongst the fans.

Vaanam turned as a much awaited film of the season as it is all about complex combination of five different interwoven stories which is so far not seen in Tamil cinema. Simbu will be seen in the role of Cable Raju which has given him a greater scope for performance. The music which is out in stores has received positive response and a couple of tracks are topping the charts. Anushka for the first shared the screen space with Simbu. Jasmine, Bharath, Vega, Sonia Aggarwal, Saranya Mohan and Prakash Raj played prominent roles. Earlier the film was scheduled for its release on April 9th, 2011 but now Vaanam’s release got postponed.

Vaanam now gets its theatrical release date on May, 6th 2011.

The film has top class technicians on board like Nirav Shah for Cinematography, Yuvan Shankar Raja for Music and Anthony for Editing. Cloud Nine is making sure to reach every nook and corner with their strategic promotion concepts.