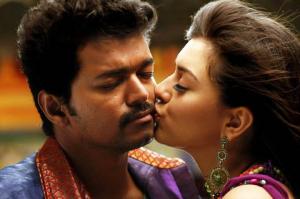 We have mentioned enough number of times of Vijay’s Velayudham but still it carries something interesting. Currently the film is on the heels of completion.

According to the sources it is known that the shoot of the film is going at a huge stadium in Thiruvananthapuram. Director Jayam Raja is canning some important scenes involved several thousand junior artistes. The team also wrapped up climax scenes in Chennai recently. Vijay is going to coming out with a different and unique look in this film. Genelia and Hansika Motwani are playing the female leads opposite Vijay. The final mixing of the audio is going on in New York and the CD printing process is already in progress. The audio will be out in stores in July.

After finishing the stunt scenes at the stadium, the crew will be flying to abroad to shot one song. With the shoot of the song the film gets completed.

Velayudham is a masala film filled with all right ingredients in right ratio for a block buster hit.