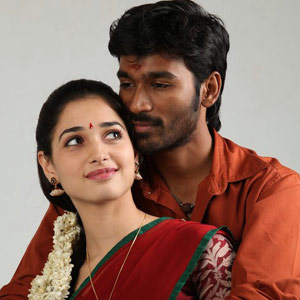 It was just a couple of days back the music of Venghai has been released and latest update of the film is that Venghai completed its censor formalities.

The film has been censored by the regional censor officials and has been certified with an U/A certificate. Dhanush and Tamannaah played the lead roles while Prakash Raj, Raj Kiran and others played pivotal roles. Commercial director Hari has done the direction for this mass masala entertainer. Sun Pictures have has reportedly snapped the theatrical rights of Dhanush starrer Venghai for a record price. The promotions of the film will start by the end of the week on Sun network channels.

Dhanush plays Selvam an angry young man while Tamanna plays a typical village girl role. The audio of the film is slowly hitting the music lovers and few songs are expected to turn chartbusters.

Venghai moving into Sun Pictures is going to yield ultimately collections at the box office with its unique promotion ways. As per trade sources Venghai is slated for July 1 release.