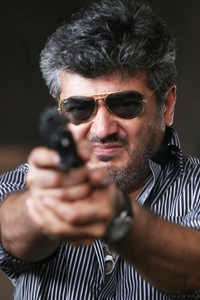 Undoubtedly Mankatha has hit the bull’s eye by topping the headlines almost every two days. Mankatha is the most awaited and most wanted project as it marks the 50th film of Ajith and more over the actor is looking forward for a hit as his last release Asal is a disaster at the box office.

Mankatha shoot has been completed and the currently the team is busy with the post productions works of the film. The trend of remaking Tamil films in Hindi has turned as the latest style and Mankatha too joins the list. Even before its release some Bollywood producers are eyeing ‘Mankatha,’ to remake it in to Hindi. But the film’s director has not yet confirmed anything regarding the Hindi remake. Some close sources to the team have confirmed this and Venkat Prabhu seems to be taking some time to decide on the Hindi-speaking crowd.

In fact the director first wants to release the film for Tamil audiences and then will be thinking of the remake. Mankatha is scheduled for its release in August and the audio is expected to release in mid July.