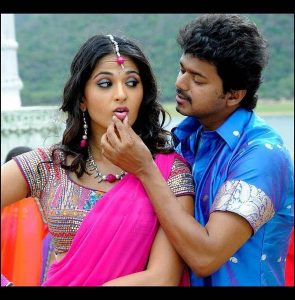 Ilayathalapathy Vijay’s Vettaikaaran (2009), directed by B. Babusivan with Anushka as the heroine, is being dubbed in Telugu as Puli Veta. Noted production designer M.V. Gopala Rao has acquired the dubbing rights.

“The original was a big box office hit in Tamil Nadu. It collected almost Rs. 50 crores. The dubbing work is currently in progress. Srihari plays the role of a sincere police office in the film,” Gopala Rao said. The film has dialogues by Shashank Vennelakanti, music by Vijay Anthony and lyrics by Bhuvanachandra, Vennelakanti and Vanamali.

The film revolves around a youngster Ravi (Vijay), who makes his journey from Tuticorin to Chennai to achieve his life’s ambition of becoming a cop. He joins a Chennai college and makes ends meet by driving an auto rickshaw. He meets Suseela (Anushka) and falls in love with her instantaneously.

But his peaceful life takes a different turn when Ravi meets Chella (Ravi Shankar), son of a bad cop Devanayakam (Salim Ghouse), who tries to spoil the life of Ravi’s classmate Uma (Sanchitha Padukone). When he tries to fight Chella, he faces trouble from Chella’s father Devanayakam, the major villain of the story. What happens next? How does Ravi face the bad men? See the movie to know!