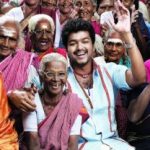 Ilayathalapathy Vijay who is busy with his promotion activities for his latest release Kaavalan is going to start his next schedule for his forthcoming film Velayudham.
Vijay known for interest in doing remakes is coming up with a script inspired by a Telugu film Azad, released in the year 2000. The film brings bubbly beauty Genelia and beautiful Hansika Motwani as the female leads opposite Vijay. Now the team is going to kick start with the next schedule in Pollachi.

Director Jayam Raja is planning big for the climax of Velayudham and it’s going to be outstanding. Aascar International of V. Ravichandran is producing the film. Music is by Vijay Anthony.

Hansika tweets “Off to Pollachi for Velayutham shoot. Back to back shooting talk to u all soon. N yaya I made it to d airport. . Cheers.”