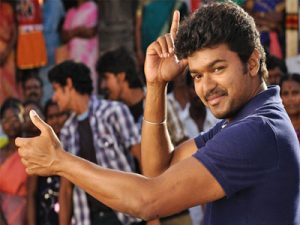 Vijay’s Velayudham shooting is going on a brisk pace in Visakhapatnam.
The film is the remake version of Telugu film Azad released in 2000. Vijay is playing a very powerful character and will be a complete fresh role. The film will be very interesting with good number of twists leading to brilliant climax. All the fans are eagerly waiting for the audio and music director Vijay Anthony is busy with compositions. He completed composition of 4 songs so far and will be completing the fifth song by April 31st, 2011. The audio is expected to reach the stores mostly by May.

The talkie portion of the film is almost wrapped up and the unit will be engaging themselves in the post production works once the shooting gets completed. Jayam Raja is making all efforts to release the film on Vijay’s birthday, June 22nd, 2011.

5 thoughts on “Vijay Velayutham Songs on May”