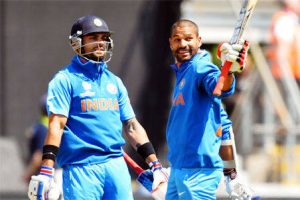 Two Indian batsmen are now in the top five of the ICC ODI rankings, with Virat Kohli remaining at number three and opener Shikhar Dhawan climbing up the ladder to fifth after earning four places in the latest list issued here today.

However, India skipper Mahendra Singh Dhoni, who is not playing in the ongoing five-ODI series against Sri Lanka due to an injury, has slipped one place to seventh position.

Dhawan has moved up owing to his superb performance in the first three matches of the ODI series against Sri Lanka. He has been the leading run-getter of the series so far with 283 runs at an average of 94.33.

In the ODI bowlers list, India’s medium pacer Bhuvneshwar Kumar is now sharing the sixth spot with Mohammad Hafeez of Pakistan after moving up a place.