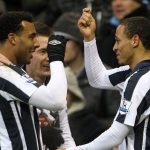 West Brom climbed into the top half of the Barclays Premier League as two-goal Peter Odemwingie and Somen Tchoyi earned them a 3-1 win over Newcastle.
Tchoyi’s first goal at the Hawthorns gave the Baggies a deserved half-time lead after they dominated the opening 45 minutes.

Then Odemwingie wrapped up the points with his fifth goal of the campaign and another in the closing seconds to take his side past the 20-point mark before Peter Lovenkrands’ last-gasp reply.

It sealed back to back league wins for Roberto Di Matteo’s side after a slump in fortunes in November and their first over the Geordies in 18 attempts.

Newcastle could have no complaints about the outcome with Chris Brunt sparkling in a central midfield role and Odemwingie causing constant problems.

Andy Carroll hardly had a look-in and Newcastle’s mini revival after the break was too little, too late.

The home side were the first to settle and the opening chance fell to Paul Scharner after a Chris Brunt corner was flicked onto the far post but he volleyed over from a narrow angle.

Newcastle were struggling to get out of their own half and Brunt drilled a 25 yard effort wide after being teed up by Tchoyi.

Newcastle midfielder Jonas Gutierrez was the first player to be yellow carded after 20 minutes for holding back Jara.

A clearance from Sol Campbell bounced off Tchoyi into the path of Odemwingie who had a run at goal but his shot flew across the face of goal.

Newcastle started to come more of the game and Carroll failed to make contact with an overhead kick after Albion failed to clear a Danny Guthrie corner.

Newcastle striker Shola Ameobi got free of his marker at another Guthrie corner but directed his header over the bar when he should have at least hit the target.

After 32 minutes Tchoyi broke the deadlock with his first goal at the Hawthorns – and his fourth of the campaign.

Brunt found Tchoyi in space inside the box and he cut inside Jose Enrique before curling a left-footed drive past Tim Krul from 15 yards out.

Tchoyi visibly grew in confidence and forced Krul to turn a fierce shot from a narrow angle for a corner after good play by Odemwingie and Jara.

James Morrison flicked a header wide from a Marek Cech centre and the Scotland international then forced Krul into a low save to his left.

Krul was relieved when Steven Taylor’s flick header flew just over his own bar from a Jerome Thomas cross.

But Scott Carson was forced to make a fine save after 50 minutes to keep his side in front.

Wayne Routledge delivered an inviting cross from the right and Taylor’s powerful header was parried away by the England keeper.

Carroll had a first sniff of a goal but dragged his shot across the face of the six yard box under pressure from Gabriel Tamas.

Enrique was yellow carded after 57 minutes after holding back Tchoyi.

Newcastle were looking more dangerous and Gutierrez jinked his way into the box and saw his deflected cross-shot evade Carson but Cech was on hand to clear close to the goal-line.

The half clearance fell to Carroll but he lacked composure in firing high and wide.

Guthrie became the third Newcastle to be cautioned for a late tackle on Thomas.

The game was more open and Krul saved low to his left from Morrison after good play by Tchoyi.

Morrison was only inches wide with another good attempt but after 71 minutes Odemwingie doubled Albion’s lead with his fifth goal of the campaign.

Guthrie slipped over on the halfway line and left Odemwingie with a clear run of goal and he kept his composure before slipping a left-footed shot wide of Krul.

Guthrie had injured himself and was stretchered off and replaced by Alan Smith who was immediately booked for a crude lunge at Thomas.

Albion finished the stronger of the two sides and Krul beat out a pile-driver from Brunt before Campbell was booked for a foul on substitute Steven Reid.

With a minute remaining, Cech had the vision to find Odemwingie and he calmly took the ball around Krul before firing home.

Lovenkrands scored a consolation goal from close range in injury-time.