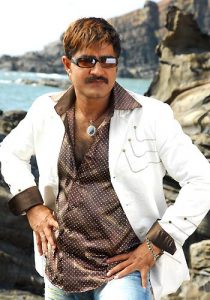 Actor Srikanth, who has hit the century in his films with Mahatma, is not in the good form oflate. His last couple of films Ranga The Donga and the recently released Dussasana bombed at the Box-Office badly.

Srikanth has now pinned all hopes on his next flick Virodhi taking shape in the hands of National Award winner Neelakanta. Virodhi is a political thriller being produced by Srikanth’s brother Anil. Kamalinee Mukherjee has played the female lead in the film. Currently, the post-production works of the film are under progress. Meanwhile, the film-makers have unveiled the posters and trailers of Virodhi that are earning positive buzz. Virodhi is slated for a release on 1st July.

Let’s wait to see if Virodhi clicks at the ticket windows and brings back the luck to Srikanth.