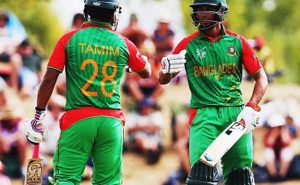 The Scots broke a few records in Nelson but not the one that they desperately wanted to break. Thanks to Kyle Coetzer’s 156 from 134 balls they posted their highest score in World Cup cricket by the massive margin of 108 runs. But they could not post that first victory.

Bangladesh scripted a brilliant chase to notch up a comprehensive six-wicket win over Scotland in their pool A ODI match of the Cricket World Cup in Nelson on Thursday.

Chasing 319 to win, Bangladesh cruised to a seemingly stiff target with 11 balls to spare, riding on four individual fifties by Tamim Iqbal (95), Mahmudullah (62), Mushfiqur Rahim (60) and Shakib Al Hasan (52 not out).

After opener Iqbal and No. 3 batsman Mahmudullah (62) laid the foundation for the chase with a 139-run stand and Rahim provided the support in the middle, it was Hasan, who brought up the win with a four off Iain Wardlaw in the 49th over at the Saxton Oval.

Bangladesh are now marginally below Australia in Pool A, which means that their match against England will be a virtual play-off for the fourth place from their group. Confidence from a big chase and avoiding a banana skin the size of Scotland would be their takeaway from this game on to their most important one of the tournament.