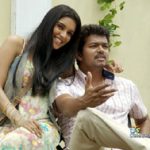 Ilayathalapathy Vijay’s next film ‘Kaavalan’ is close on the heels of completion now. The talkie portions have been completed and patently left with couple of songs. Recently a soft romantic duet number was shot at hill regions of Lavasa, situated near Pune. Since this is a special project for Vidhyasagar as it marks his 245th film, the music director has been taking special care on this film.

Since Vijay and Asin are well known for their stunning dances, the entire technical crew felt it easier to complete the song within a span of just 3 days.

The remake of Malayalam film ‘Bodyguard’ is directed by Siddique and is produced by Sakthi Chidambaram of Cinema Paradise. Asin stars opposite him in female lead role and Vadivelu takes care of comedy portions. Raj Kiran and Roja are performing important roles in this movie.